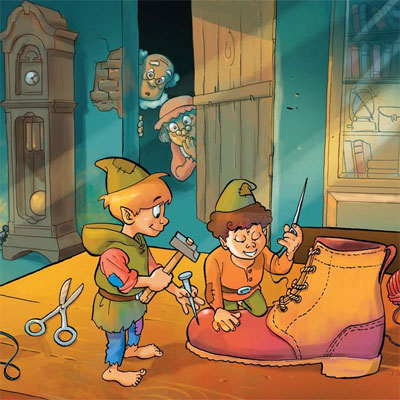 Once there was a liliput named Lilo. He, his wife and his ten sons lived in the Fairytale land. The land was ruled by a wise Queen fairy and all creatures lived in harmony.

Lilo didn’t like being a liliput. He always complained. When he passed by Gino the Ogre farm, he said,” You truly have a very big land. Look at me, because I’m small queen fairy only gave me a small one. This is unfair.”

Lilo you have told me this a hundred times. Why don’t you go to see Queen fairy and ask?” asked Gino.

“Yes maybe I should do that.” Said Lilo as he walked away sulkily.

“Hi Lilo. What a great day today.” Said Fenny the fairy.” Yes. Great day for you because you have wings and can fly.” Said Lilo, pouting.

When Lilo reached home, his children ran to him.” Daddy, let’s play hide and seek.” Said one of them.

“Go play with your siblings. Don’t disturb me.” He said.

“Turnip again?” he complained to his wife.

“But turnip is the healthiesy food for Liliput.” Said her wife. But Lilo didn’t listen. And for the rest of the day, he always grumpy as he can be. His family was quite relieved when he retired to bed.

The next day Lilo decided to visit queen fairy and state his problem. Luckily the Queen fairy was available so Lilo took the whole morning to complain about his conditions.

“All right,: said queen fairy.” I will fulfill your request. When you arrive home. You will see that everything will be as your wish for.”

Lilo ran home and noticed that his farm had really grown in size. It was so big, even bigger than Gino farm.

Lilo started to work at his farm. But soon he got so tired and he hadn’t even plowed a tenth of it.

Then Fenny came.”Lilo, the queen fairy had asked me to deliver this.” She said. Fenny was holding a pair of wings.

Fenny nodded and helped Lilo put the wings on.

“Work? What do you mean?” Lilo asked.

“Well you are flower fairy now. You have to visit all the flowers and clean them. Come on. I ‘ll show you how.”

So Lilo joined the fairies clean all the flowers in the fairytale land. By late afternoon, Lilo was so tired he couldn’t fly a single inch. So the fairies let him go home.

When Lilo reached home, he was very hungry. But he didn’t find anything on the dinner table.

“Lila.” He shouted, calling his wife. But his wife was nowhere to be seen. And his sons were not home either.

Instead, on the table, he got a letter from Queen fairy. It says: Dear Lilo, I have relocated your wife so now you can it anything you want. I have also relocated your sons so they can’t disturb you anymore.

Lilo broke into tears.” I want my farm back. I don’t need this wings. I want my wife and her turnips back. I also want my sons back.” He shouted

“You really mean it?” asked Queen fairy who suddenly appeared.

“Yes please, I promise I will always be grateful for what I already have.” Lilo said.

Queen fairy waved her wand once, and everything went back to normal.

“Daddy.” Shouted his sons.” Let’s play.” Said Lilo. “And Lila please prepare turnips for dinner.” He said as he and his sons headed out to their “just right” size farm to play.

What does being grateful mean? It means being thankful for your conditions whatever they are. It means knowing that god will provide what you need and not what you want. It means realizing that there are many people who are less fortunate than you are.