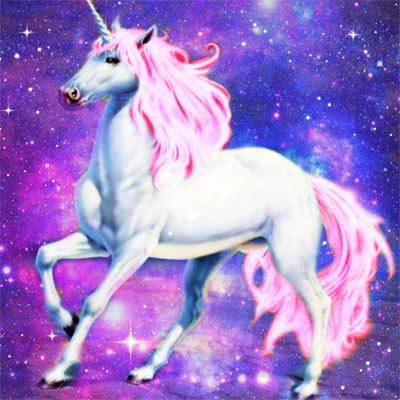 Once there was a village named Unicornville. There lived a unicorn named Una. Una lived with her daughter and she was known for her delicious cooking.

She had a food stall which always full of customers. Among her most favorite  dishes were broiled asparagus with mushroom sauce, lavender salad, and cucumber pie. The recipes had been in Una’s family for generations, inherited from mothers to daughters.

One day, Uvris, a unicorn lady, came to Unicornville. She came from another unicorn village far away. And she opened a food stall next to Una’s. Among the dishes on the menu are: broiled mushroom with asparagus sauce, lavender leaves salad and fried cucumber.

When Una saw the menu board, she couldn’t help laughing.

“Who on earth would want to eat broiled mushroom with asparagus sauce? And everyone knows that lavender flower are  more delicious than leaves. And fried cucumber? Ha ha ha .” she said to her daughter, laughing.

But then unicorns started coming to Uvris, food stall. Only a few at first, but as days went by, more and more unicorns bought food at Uvris’ place.

Una was furious. And she was even more furious when she found out that her daughter made friend with Uvri’s daughter, uvra.

“Uni what are you doing? Come inside the house now.”  Said Una to her daughter. Uni obeyed her mother.

“Why did you play together with that strange girl?” Una asked.” But, mom, Uvra is not strange. Her mohter is also kind. She gave me fried cucumber and it’s delicious.” Said Uni. Una couldn’t believe her ears.

“Cucumber should be baked not fried.” She said.

But the more and more unicorns went to buy food at Uvri’s stall instead of Una’s. Una couldn’t believe her eyes when she saw the long line outside Uvri’s stall.

The she disguised herself and went to buy Uvris lavender leaves salad.

Una brought the salad home. But she couldn’t make herself eat it.

“It’s too strange.” She mumbled to herself.

At thet time, she heard someone cry in Uni’s room. She quickly went inside and saw Uni on her bed. She lloked very sick.

“Uni what happened?” She asked

Una quickly called the doctor. But the doctor happened to be out of town.” Oh what should I do?” asked Una. She was worried.

Suddenly there was a knock on her door. Outside were Uvris and her daughter.

“Uvra told me that Una didn’t feel well at school. So I come to bring her this. In our village, whenever someone has a fever, we use this seaweed as a remedy. It usually works.” Said Uvris.

But Una had no choice. She gave it to her daughter. And to her surprise, Uni felt better after eating the seaweed. And soon the fever was all gone.

“Oh Uvris, how can I ever repay you.” Said Una to Uvris.

“That what neighbors are for, Una.” Said Uvris.

Later after Uvris left, Una ate the lavender leaves salad that she bought earlier. And to her surprise, the salad really tasted delicious.

After that incident, Una tried to make many new dishes on eher menu. There were broiled cucumber in lavender sauce, asparagus salad, baked mushroom and even seaweed soup. Both her and Uvris stall were always full of customers. And Una Always remembered to keep an open mind.